Welcome to Night Vale is a podcast presented as a radio show for the fictional town of Night Vale, reporting on the strange events that occur within it. The series was created in 2012 by Joseph Fink and Jeffrey Cranor. Published by Night Vale Presents since March 15, 2015,[4] the podcast was previously published by Commonplace Books.[5] Cecil Gershwin Palmer—the host, main character, and narrator—is voiced by Cecil Baldwin, while secondary characters are sometimes voiced by guest stars—such as Dylan Marron, who voices Carlos. The podcast typically airs on the first and fifteenth of every month, and consists of "news, announcements and advertisements" from the desert town,[6] located "somewhere in the Southwestern United States."[7] In an interview with NPR, Joseph Fink said that he "came up with this idea of a town in that desert where all conspiracy theories were real, and we would just go from there with that understood."[8] 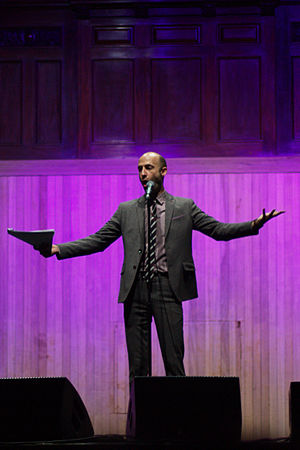 Cecil Baldwin as Cecil in the live episode "The Investigators" during the 2015 UK tour.
See also: List of Welcome to Night Vale episodes

Every episode of the podcast includes a piece of music as "the weather", each by a different independently published artist.[9] The theme and background instrumental music to the series were created by the musician and composer Disparition.[10]

In October 2013, Welcome to Night Vale began presenting live shows, which continued into 2014 with a tour of the West Coast.[11] In addition, it was announced during the episode "The Auction" that a novel would be published in 2015. Fink stated that "it's going to have all the characters and weird atmosphere that you want from Night Vale, with a brand new story that explores parts of Night Vale that we just haven't been able to get into with the podcast".[12][13] When the book became available for pre-order the following March, it became Amazon's #2 title seven months ahead of its October release date.[14]

Welcome to Night Vale's plot consists of longform storytelling.[15] Individual episodes usually function as standalone narratives and only rarely contain significant developments in storyline.[16] The writers employ running jokes and plot arcs, advanced slowly through the events described in the podcast. For example, The Glow Cloud, one of the series' most iconic characters, hypnotizes the townspeople with its colors and noxious gas, making people chant "ALL HAIL THE MIGHTY GLOW CLOUD", and eventually becomes president of Night Vale's school board. Another running joke is that the job with the highest death rate is being an intern at the radio station; the only interns and former interns who are currently alive include (in order of appearance) Cecil, Chad Bowinger, Dana Cardinal, Maureen, Vithya and Kareem.

Characters and narratives may emerge and develop slowly, while unrelated stories may combine to form new plot points.[15][17] Major stories which have occurred include the development of a romantic relationship between Cecil and Carlos;[18] the stranding of several characters, including Carlos, in a "desert otherworld";[19] the invasion of Night Vale by the corporation StrexCorp, from the rival town of Desert Bluffs, and StrexCorp's eventual expulsion from Night Vale;[20] the 2014 mayoral elections, with subsequent terrorist activities by failed mayoral candidates The Faceless Old Woman Who Secretly Lives in Your Home and Hiram McDaniels;[21] and the complications surrounding McDaniels' subsequent imprisonment and trial. The series' fourth anniversary in June 2016 coincided with a two-part climax to the most recent storyline: the invasion of Night Vale by mysterious strangers, led by a demonic beagle puppy accidentally summoned from Hell by Chad Bowinger, a former radio intern. The early plot point of a miniature city buried under the town's bowling alley resurfaced after this, in addition to the sporadic appearance of Huntokar, a deer-headed deity with connections to both the tiny city and Night Vale's unusual nature.

Zack Parsons, who wrote alongside Fink at Something Awful, has co-written four episodes: "The Traveler," "A Beautiful Dream," "The Deft Bowman," and "Lost in the Mail."[22][23] "The Auction" was co-written by Glen David Gold,[13] who also contributed material to "The Woman from Italy."[24]

In October 2015 Fink and Cranor released a novel by the same name, Welcome to Night Vale. It is told primarily from the viewpoints of Jackie Fierro and Diane Crayton, both citizens of Night Vale who have been featured in the podcast. Critical reception for the book has been positive.[25][26][27]

In the March 15, 2017 episode of the podcast, Fink announced a second novel, titled It Devours!, which deals with Carlos and his team of scientists investigating the Cult of the Smiling God. It was released October 17, 2017.[28]

The first, Alice Isn't Dead, was written by Night Vale cowriter Joseph Fink, and was performed by Jasika Nicole, who played Dana on Night Vale. The story was presented as monologues broadcast over a trucker CB radio, as a woman drives a truck across America, looking for her missing wife. The first season of 10 episodes was released between March and July, 2016, and a second season began airing in April 2017.[29]

The second Night Vale Presents podcast was Within the Wires, written by Night Vale cowriter Jeffrey Cranor and Janina Matthewson, who also performed the lead character. This story was told as a series of relaxation tapes prepared for a patient in a mysterious medical center known as "The Institute." As the story unfolds, it became clear that the narrator of the tapes had a connection to the patient, and may have had a secret agenda. The first season of 10 episodes was released between June and November, 2016.[30]

A third podcast, The Orbiting Human Circus (of the Air), was released October 12, 2016. This podcast was written by and stars musician Julian Koster.[31]

Night Vale Presents launched two non-fiction podcasts, Dylan Marron's Conversations With People Who Hate Me and Joseph Fink's I Only Listen To The Mountain Goats, in 2017. A new fiction podcast, It Makes A Sound, was also launched, detailing an amateur radio host's love of a local musician and her hopes of revitalizing her hometown. The podcast was created and written by Jacquelyn Landgraf.

The show has been described as "the news from Lake Wobegon as seen through the eyes of Stephen King", and Christopher Wynn of The Dallas Morning News characterized it as "NPR meets The Mothman Prophecies".[6] The Daily Dot's Gavia Baker-Whitelaw compared the podcast to being "caught somewhere between Weird Twitter and 'Tales of the Unexplained'" and said that it is "well worth a listen—although possibly not after dark, if you live in a small town yourself".[32] Colin Griffith of The A.V. Club said the show is "really well done, offering a surrealist/absurdist (and occasionally existentialist) take on community radio, with dispatches from the small, delectably nightmarish desert town of Night Vale".[33] Writing for TechGeek, Erin Hill considered the uniqueness of the podcast to be "its presentation of what is ordinary", adding that "many of the things that Cecil reports goes against our idea of normal, but [everything] is presented in a manner that makes it seem mundane".[34]

Co-producer Jeffrey Cranor attributed this spike in popularity to both Tumblr and fans of the television series Hannibal. Max Sebela, a creative strategist for Tumblr, stated that the fan following began to "spiral out of control" beginning on July 5, with that week having "20,000-plus posts about 'Night Vale,' with 183,000-plus individual blogs participating in the conversation, and 680,000-plus notes".[37] The Twitter account for the podcast has been noted as having more than 20,000 followers by July 2013.[10]

According to The Daily Dot, new listeners primarily come through fan following and word of mouth primarily on Tumblr with fan fiction and fan art focusing on the romantic relationship between the show's narrator and scientist Carlos.[38] Fans have published "fanscripts", transcripts of the podcast, in order to widen the accessibility of Welcome to Night Vale.[39]

On October 15, 2015 producers Joseph Fink and Jeffrey Cranor were interviewed on The Late Show with Stephen Colbert, and Cecil Baldwin appeared for a Community Calendar public service message for Night Vale.[40] Mike Rugnetta of PBS's web show Idea Channel compares the show to horror writer H.P. Lovecraft's style of writing about fear of what we don't know. He says "But Night Vale turns Lovecraft's 'unimaginable terror' into 'drab mundanity'."

In December 2017, it was announced that Gennifer Hutchison, a writer and producer on Better Call Saul and Breaking Bad, is adapting Welcome to Night Vale for television. The series is being produced by Sony Pictures Television, where Hutchison has an overall deal, and developed for FX. Fink and Cranor will serve as executive producers.[41]

Retrieved from "https://podpedia.org/w/index.php?title=Welcome_to_Night_Vale&oldid=39396"
Categories:
Hidden category:
Cookies help us deliver our services. By using our services, you agree to our use of cookies.