NASA EDGE is a video podcast which explores different missions, technologies and projects developed by NASA. The program was released by NASA on March 18, 2007, and as of June 2010[update], there have been 53 vodcasts produced.

NASA EDGE is a public outreach vodcast sponsored by NASA's Exploration Systems Mission Directorate and based out of the Exploration and Space Operations Directorate at Langley Research Center in Hampton, Virginia. NASA EDGE takes an insiders look at current projects and technologies from NASA facilities around the United States, and is depicted through personal interviews, on-scene broadcasts, computer animations, and personal interviews with top scientists and engineers at NASA. The show explores the contributions NASA has made to society as well as the progress of current projects in materials and space exploration. NASA EDGE vodcasts can be downloaded from the NASA website and from iTunes. 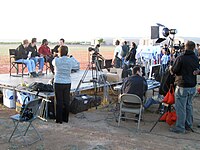 NASA and the NASA EDGE have developed interactive programs designed to complement the vodcast. The Lunar Electric Rover App allows users to drive a simulated Lunar Electric Rover between objectives, and provides information about and images of the vehicle.[4] The NASA EDGE Widget provides a graphical user interface for accessing NASA EDGE vodcasts, image galleries, and the program's Twitter feed, as well as a live NASA news feed.[5]

Retrieved from "https://podpedia.org/w/index.php?title=NASA_Edge&oldid=15240"
Categories:
Cookies help us deliver our services. By using our services, you agree to our use of cookies.