Graf von Faber-Castell sells the Perfect Pencil, a sort of pencil extender with an integrated sharper. The end of the pencil houses an eraser, and has a metal cap. Placing the pencil with the point in the extender makes it possible to then use the extender's clip on a pocket, without worrying about the pencil marking clothes or making holes. There are several versions of the Perfect Pencil, in plastic, platinum-plated metal, and sterling silver. 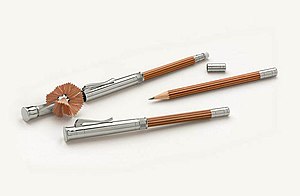 The pencil extender with integrated sharpener occupies a special position in Graf von Faber-Castell's collection. Together with the replaceable eraser under the pencil's cap, everything is always quickly accessible within the smallest space - for writing, correcting and sharpening.

Graf von Faber-Castell offers a variety of fountain pens. Graf von Faber-Castell fountain pens employ a cartridge/converter filling system, which allows the pen to be filled with ink using either an ink bottle or with self-contained, hassle free cartridges. The models offered come in a variety of finishes, such as wood, lacquered metal, amongst other finishes. Fountain pen nibs are either 18K gold nibs, or polished stainless steel with a hard-wearing iridium metal tip.

"Pen of the Year"[edit | edit source]