Faber-Castell is one of the world's largest and oldest manufacturers of pens, pencils, other office supplies (e.g., staplers, slide rules, erasers, rulers)[1] and art supplies,[2] as well as high-end writing instruments and luxury leather goods. Headquartered in Headquartered in::Stein, Germany, it operates 14 factories and 20 sales units throughout the globe. The Faber-Castell Group employs a staff of approximately 7,000 and does business in more than 100 countries.[3] The House of Faber-Castell is the family which founded and continues to exercise leadership within the corporation.

There are about 14 manufacturing plants (in 10 countries) which mainly manufacture writing instruments.[4]

Founded in 1761 at Stein near Nuremberg by cabinet maker Kaspar Faber (1730–84), the enterprise has remained in the Faber family for eight generations.[5] It opened branches in New York (1849), London (1851), Paris (1855), and expanded to Vienna (1872) and St. Petersburg (1874).[5] It opened a factory in Geroldsgrün where slide rules were produced. It expanded internationally and launched new products under Kaspar Faber's ambitious great-grandson, Lothar (1817–96).[5] In 1900, after the marriage of Lothar's granddaughter with a cadet of the Counts of Castell, the A.W. Castell enterprise took the name of Faber-Castell and a new logo, combining the Faber motto, Since 1761, with the "jousting knights" of the Castells' coat-of-arms.[6]

Today, the company operates 14 factories and 20 sales units, with six in Europe, four in Asia, three in North America, five in South America, and one each in Australia and New Zealand. The Faber-Castell Group employs a staff of approximately 7,000 and does business in more than 100 countries.[3]

Faber-Castell is well known for its brand of PITT Artist pens. The pens, used by comic and manga artists such as Adam Hughes,[7] emit an India ink that is both acid-free and archival, and comes in a variety of colors.

The following chart contains all the Faber-Castell product lines.[8]

From about 1880 to 1975 Faber-Castell was also one of the world's major manufacturers of slide rules, the best known of which was the 2/83N.

The immensely wealthy Lothar Faber had been ennobled in 1861 and made Baron von Faber in the Kingdom of Bavaria in 1881 but,[5][9] the sons of his only son Wilhelm (1851–1893) (by his wife Bertha Faber {1856-1940}, daughter of Lothar's younger brother, Eberhard {1822-1879}, who had founded the New York branch of the company) having died young, a marriage for his granddaughter and heiress Ottilie was arranged with a scion of one of Germany's formerly ruling comital dynasties. Yet in the conservative German Empire of fin-de-siècle Europe, the marriage of a Faber into a family of the high nobility was regarded as too bold a leap upward socially. A morganatic marriage would have been required, and the Faber pencil works could not have remained in the hands of their descendants because trafficking in commerce was still considered an act of social derogation among members of the Hochadel. 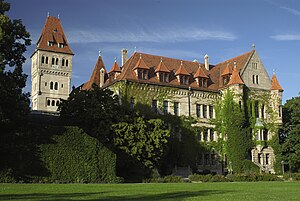 Faber Castle at Stein near Nuremberg

To resolve this dilemma, the chosen groom, Count Alexander Friedrich Lothar von Castell-Rüdenhausen (1866–1928) renounced his birth rank prior to the marriage. The Castell family had been Imperial counts in Franconia, known since the 11th century. When the Holy Roman Empire was dissolved under pressure from Napoleon I in 1806, the Castell lands were annexed by the Kingdom of Bavaria. Although deprived of sovereignty, in 1815 the Castells were mediatized, their rank with the reigning dynasties of Europe being formally recognized,[10] and family would be granted the hereditary title of Prince.[10] Count Alexander, a younger son of the first prince, married the pencil heiress, Baroness Ottilie von Faber (1877–1944), in 1898.[10] He was granted the new hereditary title of Count von Faber-Castell by Luitpold, Prince Regent of Bavaria for the descendants of their marriage.[10][11] Although Alexander and Ottilie divorced in 1918, the Faber business trust had transferred headship of the company to Alexander,[5] who even kept the Fabers' renovated palace at Stein (which would be commandeered to billet journalists during the Nuremberg trials, including Ernest Hemingway and John Steinbeck).[12]

In 1927 Alexander resumed his original name for himself, his second wife (born a countess, Margit Zedtwitz von Moravan und Duppau, 1886–1973), and their son, Count Radulf (1922–2004).[11] His issue by the first marriage had never been considered dynasts of the House of Castell, but they inherited the vast Faber fortune and continue to include Castell in their name with the comital title.[11]

Alexander and Ottilie's only son, Count Roland Lothar Wolfgang Christian Ernst Wilhelm von Faber-Castell (1905–78), inherited headship of the Faber-Castell companies from his parents.[5] By his second marriage in 1938 to Katharina Sprecher von Bernegg (1917–94), Roland was the father of the former head of the family, his third son, Count Anton-Wolfgang Lothar Andreas von Faber-Castell. Anton-Wolfgang was born in Bamberg 7 June 1941, was married (briefly) in Las Vegas on 16 June 1986 to Carla Mathilde Lamesch — mother of his only son, Count Charles Alexander von Faber-Castell, who was born in Zürich 20 June 1980 — and he wed secondly, at Stein on 12 December 1987, Mary Hogan (b. 1951), by whom he has three daughters (Katharina, and the twins Sarah and Victoria).[9] He led the company from 1978 until his death on January 21, 2016.[13]

Anton-Wolfgang's niece, Countess Floria-Franziska von Faber-Castell (b. 1974) was married at Kronberg on 17 May 2003 in a much-publicised wedding attended by members of Europe's reigning families, to Donatus, Hereditary Prince of Hesse, a great-grandson of King Victor Emmanuel III of Italy and a grand-nephew of Princess Sophie of Greece and Denmark, sister of the British prince consort, Philip, Duke of Edinburgh. Floria is a daughter of Hubertus (1937–71), second son of Roland. Various branches of the Faber-Castell family still flourish, but in the past the Faber and Faber-Castell corporate holdings have usually passed to the eldest male of the patrilineage.[5]