The Generally Speaking Production Network (GSPN) is an online media production company founded by Cliff and Stephanie Ravenscraft on December 16, 2005.[1]

A fan of the television series Lost, and inspired by Leo Laporte and his this Week in Tech podcast, Cliff Ravenscraft began with a Lost-discussion podcast after only finding one other on the subject in 2005. Ravenscraft began the podcast as a hobby with no experience in broadcasting, radio, or television; in a June 2007 interview with Podcast User Magazine, Ravenscraft confessed that "he didn’t put a lot [of] preparation into the show at first, and that his audio was poor, but [...] the content was in high demand." Ravenscraft gathered thousands of listeners in only a few weeks, and quickly added his wife Stephanie to the podcast.[2][3]

Soon thereafter, they launched a second Lost podcast, followed by podcasts discussing faith and family issues, and one about Cliff's life (originally titled My Crazy Life). In December 2008, Cliff Ravenscraft had worked in the insurance industry for eleven years when he left his $87,000 per-year job at Jack Lillie Insurance (his stepfather's firm) to begin podcasting full-time.[3][4] Though Cliff had to withdraw $14,000 from his IRA in 2008, he claims that since October 2009 GSPN was producing "more money every month that [he's] ever made in [his] life."[4] 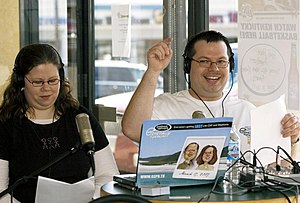 Cliff Ravenscraft (born c. 1972/1973) grew up in Erlanger, Kentucky and graduated Conner High School in 1992. In 2001, Ravenscraft was an associate pastor of a Highland Heights, Kentucky church for which he blogged about his faith in his "Almost Daily Devotional". Building upon a childhood interest in CB radio, and after he began the Weekly LOST Podcast, Ravenscraft switched from blogging to podcasting for the ease he found in the latter.[4]

Cliff and his wife Stephanie have three children, Meagan, Matthew, and McKenna.[4] The elder two Ravenscraft children have produced their own GSPN podcasts, The World According To Meagan and Gaming With Matt respectively.[5][6]

GSPN only advertises on two of its podcasts, and has very strict requirements as to where and how advertisements will be implemented. In addition, GSPN previously offered a subscription service for US$10 a month which stripped ads for subscribers, and gave them access to additional podcast material and a daily blog; GSPN had more than 80 listeners subscribe to the service in its first two weeks. GSPN scrapped the Plus Member program on January 17, 2011 and has since given away all content for free including content previously only for Plus Members. The PodcastAnswerMan podcast however sells products where the product its self is not a podcast rather a video tutorial. Cliff Ravenscraft also offers a 4-week online Podcasting course which has a cost.[3] As of July 2010[update], GSPN currently lists 24 separate podcasts, divided by subject matter:[7]

I started the Weekly Lost Podcast in 2005 because I wanted to combine my love of technology with my love of Lost.
Cliff Ravenscraft, on starting podcasting[8]

Cliff Ravenscraft began GSPN and his podcasting career with his Lost podcast, and it "changed his life".[4][9] Stephanie Ravenscraft introduced her skeptical husband to the series and, after watching the first season finale in May 2005, he was hooked. Seven months later, Cliff recorded the first episode of the Weekly LOST Podcast for 30 minutes, the first official GSPN production.[4][10]

As of July 2010[update], there are 261 episodes of the Weekly LOST Podcast which, produced in Hebron, Kentucky, has fans in France, England, Belgium, Qatar, Austria, and Australia among its over 50,000 subscribers.[4][9][11] On May 23, 2010, GSPN hosted an internationally attended party to watch the series finale of Lost; guests from Belgium, the Netherlands, and from California to Connecticut reserved the entirety of the restaurant Bistro 737 at the Cincinnati Airport Hilton Hotel in Florence, Kentucky.[4][9][12]

In addition to producing and publishing their podcasts, the Ravenscrafts offer consulting for others interested in beginning podcasting, as well as setting up a website and all the amenities necessary to begin podcasting.[3] Podcasting AtoZ is a regular course, founded by Cliff Ravenscraft, to provide a highly professional start for aspiring podcasters.[15] In 2008, GSPN submitted an application to Apple's App Store, but despite having similar functionality to other approved applications, was rejected;[16] the application was later accepted.[17]