Epic Fu (formerly known as JETSET)[1][2] is a web series created by new media producers[3][4] Steve Woolf and Zadi Diaz. The show premiered on June 1, 2006 with Diaz as the host.

Compared to Rolling Stone and MTV by Advertising Age[5] and described as a hyperfast-paced pop culture newscast by Wired,[6] each episode of Epic Fu runs an average of 5–10 minutes and is generally divided into four main sections: news, music, interviews, and community.

Host Zadi Diaz behind the scenes during an episode of Epic Fu.

Every episode of Epic Fu begins with host Zadi Diaz at her desk introducing the week's top stories. The news section often includes stories highlighting how technology and the web is affecting our culture in art, music, style and politics. News stories are also submitted by audience members.

The show typically includes a music video intermission called "Music Video Spotlight" also known as "Sh!t We Like," which highlights an independent or unsigned band or musician.

Interviews appear in the second half of the show and are generally conducted on-location. Guests include web personalities, technologists, artists, musicians, political figures, inventors, authors, television personalities, and off-beat types.

The Epic Fu community contributes regularly to the content of each episode in the form of news links, correspondent pieces, and response videos to "Campfire" discussions. The central hub for the show's community is called MIX, currently involving over 4,000 of the show's fans, and is located on the Epic Fu website. There, fans upload photos, videos, music, submit ideas, and begin discussions on forum threads. EPIC FU also uses social networking sites like Twitter and Facebook to connect with fans. The show regularly initiates collaborative projects to involve its community. Some of these have been a collaborative film, flash game battles, Alternate Reality Games (ARGs), and participation in an eco-challenge called Seven Days Without Plastic.[7] Participating members are incorporated into the show. 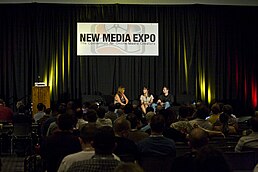 Epic Fu first premiered as JETSET (also referred to as Jet Set Show) on June 1, 2006 and was geared towards a young audience. Amanda Congdon and Andrew Baron were initially tied to the first few episodes of the production,[8] but the partnership dissolved with the Rocketboom split in July 2006.

In April 2007, JETSET was the first established web show to sign with web video studio Next New Networks (NNN).[9] NNN took the role of selling sponsorship and handling cross-promotion for the show. In its tenure with NNN, the show grew from 30,000-40,000 views per episode to 3 million views a month.[10]

In October 2007, Smashface Productions decided to change the name of the show from JETSET to Epic Fu, citing a need to protect their intellectual property with a more original name.[11]

After a year with NNN, Epic Fu was contemplating a move to television,[12] but then signed with West Coast digital studio Revision3 in June 2008.[13] This was notable because at the time EPIC FU was the highest profile web show to switch from one new media studio to another.[14] The partnership ended shortly after in December 2008, when Revision3 laid off nine employees, cancelled three original shows and eliminated two of its distribution deals, citing that the shows didn't fit with their long-term plans.[15]

Currently, Epic Fu is independently run and distributed through Blip.tv.[16]

Episodes of Epic Fu are produced by Smashface Productions and filmed in Los Angeles, California. Production is led by Zadi Diaz and Steve Woolf.

The show has had various producers involved throughout its time on-air, including Brian Lerner and Rick Rey. Annie Tsai and Sarah Atwood have also helped in production efforts and occasionally acted as correspondents. Daniel Merlot and Mike Ambs have been credited as editors. 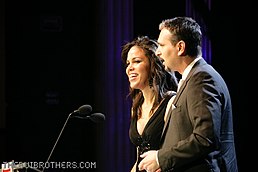 Below are past and present segments that have appeared on EPIC FU.