Diggnation was Revision3's flagship video podcast produced weekly. It was hosted by Kevin Rose and Alex Albrecht, who had previously hosted TechTV's The Screen Savers together. Its main purpose was to discuss some of the top stories from Digg, the social news and bookmarking website developed by Rose and others. The first episode "aired" online on July 1, 2005. The format of the show usually involved Rose and Albrecht reviewing beverages, mostly beer, but occasionally tea, coffee, hard liquors like Vodka or Whisky at the opening of the show, which they consumed throughout the show, followed by them discussing various Digg stories from the previous week, with often off-topic banter with each other and with producer David Prager and camera operator Glenn McElhose. Both audio and video versions of the podcast are available from Revision3 for streaming or downloading in various formats.

The intro sequence was created by Eden Soto[1] in collaboration with David Prager. It was in development for more than three months, according to Eden Soto's[1] website.

A spin-off show, The Digg Reel ran from January 2008 to September 2010, and was originally hosted by Jessica Corbin, followed by Andrew Bancroft. The show featured the week's top user submitted videos in comparison to Diggnation's primary focus on news articles. Both were produced by Revision3.

On October 3, 2011 David Prager announced the show would end with its 340th episode at the end of 2011.[2] Occasional Reunion Live Shows might happen in the future.[3]

Kevin drops his cat after spilling beer on his couch during the first minutes of episode #123.

The show begins immediately with a short listing of the podcast's current sponsors, and is usually followed by a humorous fake advertisement (i.e. Bose's Noise Enhancing Headphones, "Days of our Prager", Cougars: Aged to Perfection, etc.). After the title video, the hosts introduce themselves, tell the viewers where they are filming from, make any relevant announcements, and discuss the drinks they will have during the episode. The beer tasting and beverage aspect of Diggnation is one of the show's unique aspects. The majority of the episode is dedicated to the discussion of news items as well as personal commentary, anecdotes and unrelated banter. The show's humor is generally somewhat vulgar, often due to considerable intoxication. At the end of the show, Rose and Albrecht mention their sponsors once again in a longer advertisement spot, read e-mail from fans, then conclude the show with a seemingly ad libbed phrase or saying. Starting with more recent episodes, larger Digg stories (typically the weeks big news) are discussed after the ads, but before the emails. This is keeping in line with most other Revision3 shows. 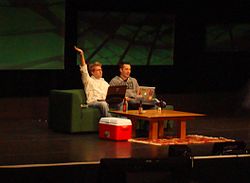 Diggnations live show in San Jose as part of NVISION 08.
Diggnation episodes were released weekly on Wednesdays at 6 PM (EST). Previously, the show was released on Friday at the same time for paid members, and Sunday at 12:01 for everyone. There were an estimated 250,000 regular subscribers to the show during its peak.[6] BitGravity handles iTunes and TiVo subscribers, downloads from the website, and RSS feeds. Virgin America airlines also offers on-demand episodes available on the in flight entertainment systems (along with other Revision3 shows). Repeats, edited for content, time and profanity, are also seen on the cable network Youtoo TV as part of Revision3's contract with that network.

David Prager suggested to name the Digg website "Diggnation". Rose decided on the simpler Digg instead. Rose subsequently chose Diggnation as the name of the podcast.

Although hosting duties were typically split solely between Kevin and Alex, a few "third-chair" guests were invited onto the program:

Retrieved from "https://podpedia.org/w/index.php?title=Diggnation&oldid=39341"
Categories:
Cookies help us deliver our services. By using our services, you agree to our use of cookies.