Esterbrook (trademark name: Esterbrook, est. 1858) is a brand of fountain and ballpoint pens, produced by Harpen Brand Holdings, LLC, which acquired the rights to manufacture pens under the "Esterbrook" brand name.[1]

Originally, Richard Esterbrook was the largest pen manufacturer in the United States, having reached a record of producing 216,000,000 pens a year.[2] The company produced dip pens, then concentrating on fountain pens until it was acquired by Venus Pencils in 1967, ceasing activities in 1971. 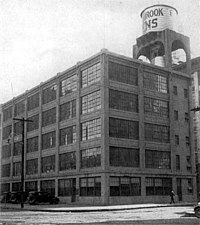 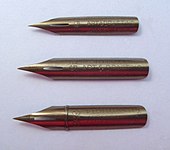 Richard Esterbrook (1812-1895 [3]) was a Cornish Quaker from England who saw an opportunity in the United States to manufacture steel pens. In 1856 he traveled to the US to set up shop as "The Steel Pen Manufacturing Company". In Established::1858 he was able to establish himself as the sole pen manufacturer in the USA and he changed the company name to "The Esterbrook Steel Pen Mfg. Co.", with just 15 employees and settled down in Camden, New Jersey. At the time, two of the four pen companies located in the United States were situated in Camden. Besides Esterbrook, the first in the country, the C. Howard Hunt Pen Company at 7th and State streets produced pens, pencil sharpeners and allied products and employed 125 workers. At its height, the Esterbrook plant had 450 workers and produced 600,000 pens a day.[4]

There were no men in this country learned in the pen trade and no suitable machinery, so it was necessary to design and build all machines. Only fifteen people made up the first payroll, but the growth of the company was steady. The buildings were added to from time to time and in 1912 a five-story concrete building was erected nearly doubling the size of the plant. Automatic Machines replaced hand work, and the output greatly increased.

Quality was a key factor in his success. His steel pens were versatile, long lasting, and came in many different styles to fit the varied writing styles of the public. Sadly, Richard Esterbrook didn't see the "empire" his company was to become as he died in Atlanta on October 12, 1895.

In 1947 Esterbrook bought out John Mitchell (which had been established in 1822 as the World's first manufacturer to cut nibs by machine) and then acquired Hazell Pen Co. The company re-formed again as "The Esterbrook Pen Company". Some time after that, Esterbrook ceased production of dip pen nibs permanently.

The post war years had seen a decline particularly in the export trade to the traditional markets of the British Empire. As those countries gained independence due to American aid, they had more dollars to spend in the United States than pounds in the United Kingdom.[4]

Esterbrook continued to thrive until the beginning of 1960 when it started to see a decline in export trades with England. In 1967 the Esterbrook Empire was bought out by the Venus Pencil Company and thus the name changed to "Venus Esterbrook", which continued to produce replacement nibs for fountain pens. There were numerous administrative changes and moves and eventually their final base of operations was vacated in 1972, though the building still stands today.

Venus Esterbrook would be finally taken over by Berol in 1971,[3][5][6] all Esterbrook operations ceased.[7]

In 2014, Harpen Brand Holdings, LLC announced the revival of the Esterbrook Pen brand after securing the trademark rights for the Esterbrook brand name.[1][8] The brand, now named "Esterbrook, est. 1858", launched new versions of classic Esterbrook models, such as the "Deluxe" fountain pen and the "J" ballpoint pen, both originally released in the 1950s.[9]

Esterbrook pens were among those used by Presidents John F. Kennedy and Lyndon B. Johnson to sign legislation.[10][11][12] A set of 72 clear Lucite Esterbrook fountain pens were famously used to sign the civil rights bill into law in 1964.[13] 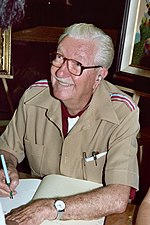 Carl Barks was an Esterbrook enthusiast.

The famous Disney artist Carl Barks was an enthusiastic user of Esterbrook pens. He particularly used a Nº 356 model to ink and letter his famous Donald Duck comic-book pages.[4][14]

Peanuts creator Charles M. Schulz used an Esterbrook 914 Radio nib for inking the comic strip. He liked the nib so much, he bought the remaining stock when Esterbrook went out of business.[7][16]