Bloggingheads.tv (sometimes abbreviated "bhtv") is a political, world events, philosophy, and science video blog discussion site in which the participants take part in an active back and forth conversation via webcam which is then broadcast online to viewers. The site was started by the journalist Robert Wright (The Evolution of God, Nonzero: The Logic of Human Destiny, The Moral Animal) and the blogger and journalist Mickey Kaus on November 1, 2005.[1] (Kaus has since dropped out of operational duties of the site as he didn't want his frequent linking to be seen as a conflict of interest.[2]) Most of the earlier discussions posted to the site involved one or both of those individuals, but since has grown to include a total of over one thousand individual contributors, mostly journalists, academics, scientists, authors, well known political bloggers, and other notable individuals.

Unregistered users are able to view all of the videos which are contained on the site, while free registration is required to comment on the individual discussions, or participate in the forums.

Bloggingheads discussions are conducted via webcam between two (or more) people, and can be viewed online in Flash format, or downloaded as WMV video files, MP4 video files, or MP3 sound files.[3] New diavlogs are generally posted daily, and are all archived for future viewing. The diavlogs are generally broken up into a series of topics and subtopics a few minutes in length, links to which are placed below the video window to allow viewers to navigate to a given topic if they do not wish to view the whole discussion.

Most of the discussions posted to Bloggingheads.tv involve well known (or semi-well known) journalists, bloggers, science writers, scientists, philosophers, book authors, or other specialists in segments of current world events. Many of the discussions are of a political nature or are related to the current political environment. Those with differing points of view are often matched against one another.[4] Diavlogs involving guests appearing for the first time often take the form of an interview, more often than that of a discussion, with a longtime Bloggingheads contributor playing the role of interviewer.

Although most episodes and matchups do not occur on any kind of a regular basis, there are a few notable exceptions to this. There is a frequent (previously biweekly and weekly, but now less frequent) diavlog matchup between the two co-founders of Bloggingheads.tv, Robert Wright and Mickey Kaus, generally related to politics in some form, that usually occurs on either Wednesday or Thursday. While some of the other diavloggers are frequently matched against each other (e.g. David Corn & James Pinkerton) there is usually not a regularly scheduled time at which they take place.

John Horgan and George Johnson in a discussion on a "Science Saturday" episode of Bloggingheads.tv.

"Science Saturday" was the name given to the weekly episode appearing on Saturday that was always science related. Its last episode was released on December 24, 2011[5]. It usually (but not always) involved either one or both of the science writers John Horgan and George Johnson. Many well-known people in the science community were a part of Science Saturday, including Michael Shermer of Skeptic Magazine,[6] biologist PZ Myers,[7] Craig Venter of the Human Genome Project,[8] aging researcher and biogerentologist Aubrey de Grey,[9] and philosopher David Chalmers,[10] among many others. However, in September 2009, four high-profile science bloggers who had previously participated in Bloggingheads.tv discussions publicly distanced themselves from the site and stated they would no longer agree to appear in Bloggingheads.tv segments. The scientists — Sean Carroll, Carl Zimmer, Phil Plait and PZ Myers — all criticized what they claimed was a policy by Bloggingheads.tv to provide a platform for the anti-scientific ideology, Creationism without an opposing point of view for balance. PZ Myers said: "[Bloggingheads.tv] was setting up crackpots with softball interviews that made them look reasonable, because their peculiar ideas were never confronted."[11]

Aubrey de Grey being interviewed by Eliezer Yudkowsky on Bloggingheads.tv.[9]

"The Week in Blog" was a weekly segment which normally appeared on the site on Fridays. Its last episode was released on March 7, 2012 [12]. The format was to discuss what has showed up on the past week on both liberal and conservative blogs, from both a liberal and conservative viewpoint. The three regular hosts of "TWIB" were Bill Scher of Liberal Oasis, Kristin Soltis of the Winston Group, and Matt Lewis of The Daily Caller. Original host Conn Carroll of The Heritage Foundation stepped aside in early 2009. Guests who appeared on the show are Armando Llorens (of Daily Kos),[13] Amanda Carpenter,[14] and Nate Silver (of FiveThirtyEight)[15] among many others.

On November 1, 2005, the site launched, with Robert Wright and Mickey Kaus as the only two initial participants in the video discussions.[16] The site has since featured more than one thousand other diavloggers.

On October 18, 2006, a site redesign was launched, with a revised home page and improved functionality: ability to comment on diavlogs was added, and to participate in forum discussions.[17]

In January 2007, it was announced that cable TV pioneer and C-SPAN founding chairman Bob Rosencrans, with a loose network of others, would become an angel investor of Bloggingheads.tv. The infusion of cash[2] kicked off a dramatic expansion of the site's content, and a corresponding growth in viewers.

On March 24, 2007, in a diavlog between Garance Franke-Ruta and Ann Althouse, Althouse became quite animated and angry (to the point of yelling) over a comment Franke-Ruta made (in reference to an earlier controversy involving Jessica Valenti and former US president Bill Clinton[18][19][20]) referred to as an on-air "meltdown" by some.[21] This led to many blog posts and news stories in the following days on both the initial controversy and Althouse's on air behavior.[22][23][24][25]

On October 13, 2007, a conversion to Flash format from the initial Windows Media format took place.[26]

On October 24, 2007, Bloggingheads.tv entered into a relationship with The New York Times, whereby selected video segments from the Bloggingheads site would appear in the "Videos" section on the Times website, under the Opinion subsection.[27][28]

In 2008, several new segments and diavloggers were added or made more regular, including "Free Will", "This Week in Blog", and "UN Plaza". Other updates and tweaks to the site, such as the addition of the MP4 video format were also gradually phased in.

Traditional media outlets, such at The New York Times[4] and others,[30] have written mostly favorable reviews of Bloggingheads.tv. Stories are also often written about individuals who take part in the video discussions,[31] as they are often well known individuals in the scientific, academic, journalism, or blogosphere community.

Some events and personality appearances on Bloggingheads.tv have led to larger than usual amounts of media coverage, such as the March 24, 2007 Ann Althouse controversy described above, and the appearance of Andrew Sullivan on December 26, 2006 and January 1, 2007, when he discussed in the most clear terms up to that point his reversal of viewpoint on the Iraq war, and his plea of apology for supporting it in the first place.[32][33]

The term "diavlog" (sometimes written "dia-vlog" by some bloggers[34]) means a type of video blog (or "vlog") generally in which two people participate, as contrasted with a (mono)vlog in which one contributor is featured. The word "diavlog" is a portmanteau of the phrase "dialog video weblog" (or, alternately, "video weblog dialog"). The diavlog format is most popular for political, world events, or other types of conversational video blog discussions in which two (or more) people are actively participating in a real-time, give-and-take discussion of ideas.

The term "diavlog" was first adopted and put into wide use by Bloggingheads.tv contributors, (initially by Robert Wright and Mickey Kaus), though its original coinage is subject to debate.[35] The term is widely used both by people on air, as well as commentors, refer to a specific conversation.

Although initially coined on the Bloggingheads site, the term has come to be used in other parts of the blogosphere and among journalists who frequently (or infrequently) participate in the encounters.[35][36][37][38]

The term is sometimes spelled "diavlogue" by those outside the United States.[39] (see: American and British English spelling differences)

Button used to direct link to a relevant part of the video or to embed video in another website.

Dingalink is a direct link to a specific place in a video. (a beginning time and an end time) Dingalinks have the ability for users to direct viewers directly to a relevant part of a video, without the viewer having to watch the video in its entirety. They are used with video blogs when others who write blogs, articles, emails, etc., have the aim of discussing only one segment of an entire video post. The term was named after Bloggingheads.tv's technical advisor Greg Dingle, who initially developed the technology.

On Bloggingheads.tv, direct linking is often useful in the discussion surrounding a specific "diavlog" to refer to a particular point (or points) in the discussion to clarify what is being commented on. The direct linking can be automatically generated from the Bloggingheads Flash video player, through the adjustment of the beginning and end of the video that one might want to display. (Start/End time can also be manually edited once the code is generated.)

Embedding of video is a feature that was added to Bloggingheads.tv in 2008 as a consequence of converting to Flash Video. It allows for bloggers and other websites to embed the video player into their blog or website so that the content can be viewed locally instead of the need to visit the actual Bloggingheads.tv site. This feature is similar to the YouTube and Google Video (among others) feature which had previously become prevalent on the internet. 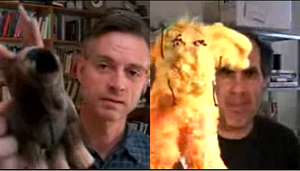 Due to the fairly limited medium of using webcams to record the video used in the Bloggingheads.tv episodes, a variety of visual aids and enhancements are sometimes added to the program by the participants. Generally this takes the form of holding up books, newspapers, or other objects that are being discussed to the camera, but sometimes it involves other, more exotic, items to either enhance a point or add something to the diavlog.

Mickey Kaus is particularly known for using visual aids such as masks (of Al Gore, Laura Bush, and others), an Ann Coulter doll, and perhaps most recognizably, a stuffed moose doll. According to Kaus, "deploying the moose"[40] symbolizes Pinch Sulzberger's idea of "the unaddressed important issue" similar to the "elephant in the room." Robert Wright has since received a stuffed moose of his own.

Also, various live animals (usually pets) have been displayed onscreen during the course of conversations. Wright has displayed his family pet, a poodle mix named Frazier, several times.[41][42] (Frazier was popular enough to subsequently get his own Facebook and Twitter profiles.[43][44]) Other people have had their cat displayed onscreen, such as that of Ana Marie Cox,[45] John McWhorter,[46] and Jonah Goldberg.[47]

Other interesting onscreen visual aids that have been employed include the use of a kazoo by Matt Welch,[48] hats by various people (e.g. a Santa hat by Jonah Goldberg,[49] and a New Years Day hat by Mickey Kaus[50]), and the display of a sextant by Robert Farley in a discussion on pirates.[51]

Apart from the regular contributors, a host of well known occasional guests have appeared, usually in the form of being interviewed. Among others, the political scientist Francis Fukuyama talked about his book America at the Crossroads; the Israeli journalist Gershom Gorenberg discussed his book The Accidental Empire (about the history of the settlements);[52] The Washington Post columnist Joel Achenbach on an article of his about global-warming skeptics[53] (among other topics[54]); Andrew Sullivan on his book The Conservative Soul;[55][56] biogerentologist Aubrey de Grey on how to defeat the "disease" of aging;[9] philosopher David Chalmers;[10] Nate Silver (of FiveThirtyEight.com);[15] and Craig Venter, director of the Human Genome Project, who spoke of future scientific innovations he is currently pursuing.[57]

Retrieved from "https://podpedia.org/w/index.php?title=Bloggingheads.tv&oldid=15233"
Categories:
Hidden category:
Cookies help us deliver our services. By using our services, you agree to our use of cookies.